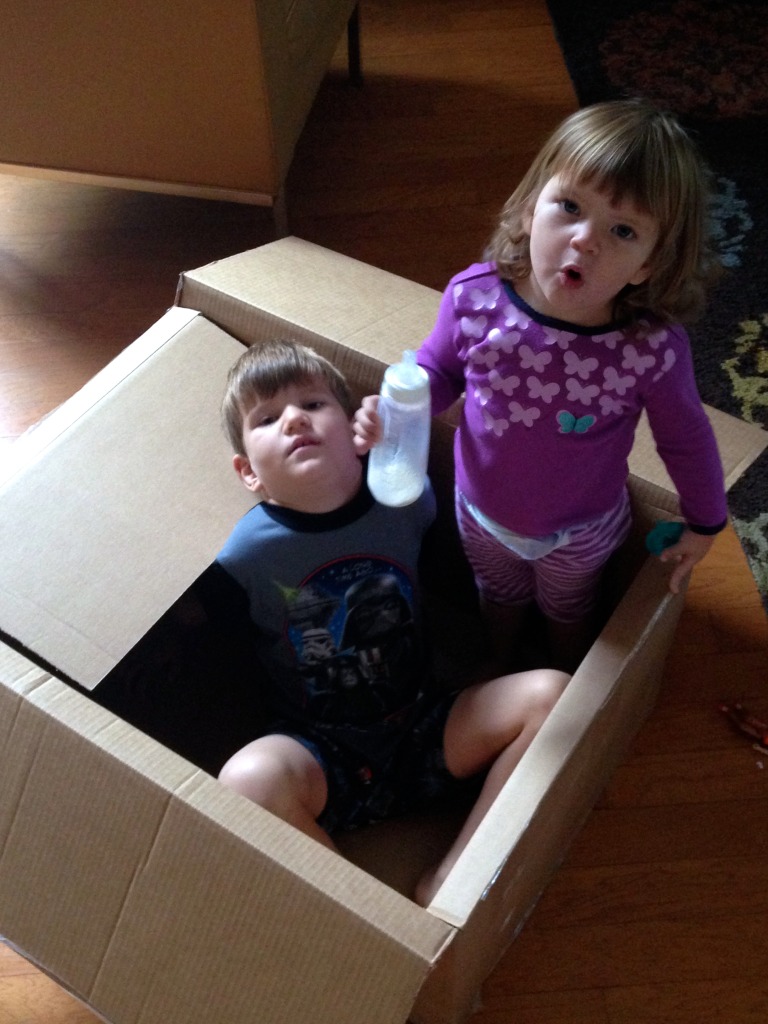 Six days ago, UPS delivered a delightful box of holiday accents to my home.

Six days ago, I removed said accents from their oversized cardboard casing and offered it to my kids.

Six days ago I made a very bad decision, because six days have gone by, and that f@$king box is still in my living room.

It’s no surprise really, the same thing happens every time a box large enough for my kids to sit in enters our home. I, with the innocence and coordination of a baby deer, bound into the room loudly proclaiming “I’ve got a surprise for you” and upon seeing said box, my children respond with the kind of intense excitement usually reserved for Christmas morning.

So begins the tumultuous relationship between myself, and that box.

Over the past six days, that box has been a car, a cave, a house, a prison and a poorly crafted rocket ship. It has been colored on, painted over and essentially bedazzled into submission. It has proven to be the source of great fun, the catalyst for many tears and of course, a major pain in my ass.

I honestly don’t know why I allow such an to object in my home. Perhaps laziness is a factor as I find breaking down large boxes a tedious job, or maybe it’s because to my kids, an empty box is like their own little version of crack. Regardless, I need to remember how I feel about that box today, so that I avoid making the same mistake in the future.

So in an effort to jog my memory the next time Pottery Barn or Amazon comes a knockin’, I have made a list of simple truths that one must take into account when considering bringing a child sized, empty box into their home.

1. What you think will be an afternoon companion will inevitably turn into a week long freeloader.

An empty box is kind of like that great Aunt who insists she’s only popping by to say a quick hello before she heads back to Arizona, but who you find holed up in your guest room 5 days later. Like that great Aunt, your kids will grow to love the box and you will quickly realize that the length of it’s stay is no longer within your control.

If you, like me, have more than one child, you already know that all of them will want to be in the box….at the same time…all of the time. One can also assume that you are painfully aware of the fact that siblings confined to a small space is always a recipe for disaster. No matter how big the box is, there will never be enough room for all of them and because of that, it will serve as a cage where by which, they can kick each other in the face without apology. You may try to set up some sort of time share system but there’s no point, because, let’s be honest, it’s a f@$king box not a house in the Hamptons.

3. You will be forced to play that game.

You know the game I’m talking about. The one where they get inside the box and you have to pretend that you don’t know where they are only to have them jump out and yell “surprise!” like a stripper at a bachelor party. The good news is that you’ll have to play it so many times that you will inevitably begin to hate the sound of your own name and eventually go numb. So, I guess that’s something to look forward to.

Nine times out of ten that box will be filled with some sort of padding and whether it’s packing peanuts or bubble wrap, it’s really just the lesser of two evils. Either way, the incessant popping or the shit scattered all over your floor will eventually evoke an Amanda Bynes grade meltdown.

5.  Disposal can be tricky.

If your kids are anything like mine, you will not be able to just throw the box away. A situation like this will require a carefully orchestrated accident of some sort. Perhaps it was left outside overnight and the sprinklers got it or there was a small kitchen fire that consumed the box but miraculously spared well, everything else. Whatever you choose, be sure to dot all of your i’s and cross every t, because you will have murdered that box and you have to be ready for them to go all C.S.I. on your ass.

So with the holidays (and their promise of endless oversized boxes) just around the corner, I want to remind you that having a box is a lot of work and huge responsibility. I am certainly not suggesting that you shouldn’t ever get one, I’m just saying that you may want to consider getting a dog or at least having another baby first.