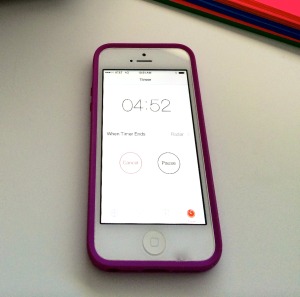 As the mother of a four and a half year old, seldom do I have a day that does not begin and end with the sound of incessant arguing followed by uncontrollable tears.  They call it the fearsome fours but in my opinion, the f*&king fours better describes the myriad of emotions that both kids and parents experience at this age.

In our house, this absolutely manic behavior is no more apparent than at the moment each night I announce “it’s time for bed”.  With those four little words, euphoric playtime turns to absolute agony in a matter of seconds.  Exhausted by these inevitable end of activity meltdowns my husband and I decided to heed the advice of so many other parents (including our pediatrician) and use our iPhone timer as a countdown to ease the transition into our bedtime routine. For the last five nights we have done just that and at first, it seemed to improve the situation.  After just two nights, we were experiencing less arguing and fewer tears.  However, it became pretty clear on night three, when my son began hurling his best little person obscenities at my phone that nothing had actually changed. All we had managed to do was transfer the anger and resentment he displayed for us onto my poor unsuspecting phone. I realized in that moment that I had turned an inanimate object into the bad cop and effectively given away any and all of my authority.  It got me thinking about my parenting and how I have subconsciously developed a whole slew of tricks (similar the iphone timer) that I use to avoid meltdowns and in turn, remain the good cop.  At least twice a week, I use the old “sorry the park is closing” to get my kids to pack it up and my son honestly thinks that he can’t go into most grocery stores because they are “adults only”, a little white lie I use when I don’t have the patience to take him with me.  I hate to admit it, but when it comes to asserting my authority and dealing with subsequent response, I am guilty of being a lazy parent.

According to my mother, frequent meltdowns while transitioning from one activity to another is age and developmentally appropriate.  Sheltering your kids from the truth in order to avoid a meltdown is only going to make it harder for them to cope with disappointment at age 8 or 12 of 26 for that matter. As with most everything in life, if you put in the work now, you should reap the benefits later.