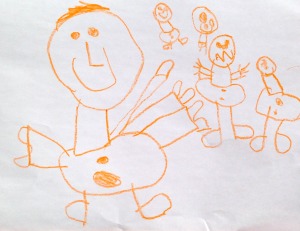 Courtesy of my son. Pay no attention to the rather frightening “penis with legs” far right.

Just recently, I experienced what I’m pretty sure will go down in history as my most validating parental moment immediately followed by my most horrifying.

Not surprisingly, both happened at the pediatrician’s office; one of my least favorite places and the site of so many of my parental missteps.  There for my son’s yearly check up, Dr. Nancy began the barrage of standardized questions designed to track his development which I was certain was normal if not slightly above average.

She asked him to reach down and touch his toes, stand on one foot and jump, write his first and last name, all tasks he did without fail.  She then prompted him to draw a picture of his family, something I knew he would excel at. Without even the slightest hint of protest, he quickly began to sketch each of us in great detail; buttons on our clothes, smiles on our faces with sunshine and love surrounding us all. To Dr. Nancy’s surprise, he continued to create this tapestry of family bliss for another 15 minutes, something she assured me was exceptional for a boy his age. She noted that his details reflected what a securely attached, fully loved individual he is and gave me a little wink, the kind of wink that says, yes Erin you are indeed a superior mother.

As we began to wrap up our discussion about his education options, she asked if he was finished with his piece? She was going to tuck it away in his chart for later.  She told me that I would cry when she showed it to me in 10 years. The two of us chuckled and as I took deep and satisfying breath my little angel responded to her by saying that he was not, in fact, done because he still needed to “add the guns”.

Dr. Nancy looked over at me for explanation, but let’s be honest, there are no words that could make what he just said go away. At that point, all I could do was pack up my kids, keep my eyes on the ground and try to sneak out of the office before word got out that I was, in fact, a crap mother raising a pair of crappy kids.

I realized in that moment that parenting is really just a series of occasional highs followed by a continuous parade of devastating lows.  If we’re lucky, we will get to enjoy the highs for a moment or two but more often than not, our kids will make their beds only to immediately, and without warning, shit in them.